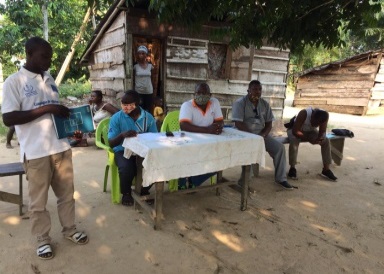 Rencontre pour la Paix et les Droits de l’Homme (RPDH) is an ACCA member organisation based in Pointe Noire in the Republic of Congo. Here is an article on activities they performed with one of the grassroots communities.

The respect of the Free Prior Informed Consent (FPIC) was the main subject of the monitoring mission of the activities of the “Forest Governance, Market and Climate” and “Integrity in Climate Initiatives such as REDD +” projects, held from 17 to 24 August 2020, at the level of the sous-prefectures of Souanké and Sembé in the department of Sangha, at the initiative of Rencontre pour la Paix et les Droits de l’Homme (RPDH).

RPDH received a funding from different donors which allow them to equip local communities and indigenous populations (CLPA) in monitoring forest infractions through an observation guide, denounce the main violations of rights arising from the exploitation of natural resources, participate in the benefit-sharing mechanism within the framework of the VPA, REDD + and Central African Forests Initiative (CAFI) processes.

The interviews carried out for this purpose allowed RPDH, to make the following observations:

Local communities benefited from capacity building sessions on the profit sharing mechanism within the framework of the VPA, REDD + and Central African Forests Initiative (CAFI) processes, on related conflicts , 'impact of forestry, mining and agro-industrial activities, and on the complaint management mechanism.

ACCA members are active in their communities and some have seen their work recognized internationally over the past 2 months. We extend our warmest congratulations to Eric and Christine Kajemba from the Democratic Republic of the Congo named as Governance and Security Sector Champions and Ezekiel Chibeze from Ghana who received the Goldman Environmental Prize for Africa.

Eric and Christine Kajemba: Champions of Governance of the security sector

Before joining the management of the “Observatoire Gouvernance et Paix” which is an NGO under Congolese law created in 2003, Eric was involved in several dynamics which aimed the democratization and pacification of the DRC.

In 1990, Eric Kajemba who was a young man, participated in the sovereign national conference as one of the delegates of congolese civil society which imposed itself as a counterweight to the dictatorship of President Mobutu.

From that time  he understood the necessity to develop more citizen engagement in regard to governance weaknesses observed in his country. He was therefore engaged in the fight for human rights in his province.

Apart from being a human right activist, Eric continued to work as a political journalist in a community radio station during the difficult times of war which has shaken the eastern part of the DRC (1998-2002). It is in that context, after listening to political and social actors that he came to realize that DRC will never have peace unless the country works on improving global gouvernance.

So,e years later he met Christine Cherubala another journalist who shared the same views as his, who became his wife. It is with her and a few friends that he will create the Observatoire Gouvernance et Paix  in 2003.

in 2006, three years after its creation, OGP oriented its focus on mining governance and community rights are now at the center of its action.

For the last two years, in partnership with the Geneva Center for Security Sector Governance (DCAF),  OGP has been working on the promotion of principles on security and human rights in the mining sector.

Under the leadership of the Kajemba couple, OGP has managed to lead a multi-actor working group on the promotion of voluntary principles, security, and human rights.

For the commemoration of its twentieth anniversary, DCAF to see fit to nominate the Kajemba couple as champion of governance of the security sector in recognition of their fight in the promotion and defense of human rights; and the improvement of security in the mining sector.DCAF said the OGP has developed innovative approaches in the field of security and respect for human rights in a context as fragile as the eastern DRC. 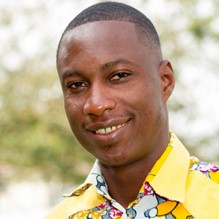 Chibeze Ezekiel is the Executive Coordinator of the Strategic Youth Network for Development (SYND), a youth-oriented NGO that promotes youth inclusion in the governance of our Natural Resources and Environmental sector. He is a strong advocate on Climate Change and Renewable Energy issues. He is a certified Youth Master Trainer on Climate Change, National SDGs Champion, Climate Reality Leader and serves on the Board of 350.org.  He was recently appointed as Panel Member of International Experts on the Environment of Peace 2022 (EP 2022) project.

He chairs the Youth in Natural Resources and Environmental Governance (Youth-NREG) Platform, This platform provides space for knowledge learning and sharing among young people working on different environmental actions as well as creating opportunity for joint advocacy in a concerted manner. He's currently leading the Youth in Renewable Energy Movement campaign in Ghana and playing an active role in Ghana's National Adaptation Plan (NAP) and Nationally Determined Contributions (NDCs) processes.